I’ve read quite a few articles and posts lately regarding dialogue and was shocked at how many people have issue with writing conversation. Writing a conversation is one of the easiest things to do (in my opinion) … but maybe it’s because I am crazy enough to talk to myself.

Many of the tips and tricks include:

An Irishman may say Top O’ the morning. A Hillbilly may say ain’t. But throw in those clues every once in a while, don’t overdo it or you will make it hard for the average person to read.

A person who goes on and on in real life will make the other person think about their grocery list, the cat’s litter pan and that hang nail that’s been bugging them. Keep the sentences short and flowing back and forth.

People talk while they are hiking, swimming, even riding on roller coasters. Put the conversation in a scenario that helps to break up the dialog with something going on.

Sometimes it is hard to do; the person wearing the glasses is always the smarter one. The waitress always has a southern accent and she’ll always say darlin’. However, if you keep it simple, you simplify the story and suddenly it’s not as unique as you’d like.

Most people don’t liked to be cussed at. I find it a real turn-off to have a story overwhelm me with bad words. Anger can be expressed in many ways without profanity. Find a way.

But those tips don’t help to make the conversation interesting; they are very generic writing tips. What the posts are really asking are how do I intrigue the reader? How do I write it so the conversation sounds real? The simple answer to that question is to create a split personality.

They say to write what you know. 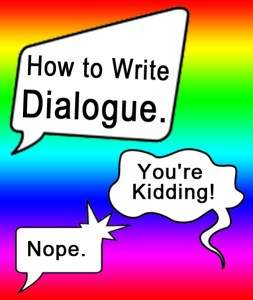 To truly write about characters you have to KNOW them. You have to become those characters. You have to BE the heroine, the antagonist AND the evil villain. You have to feel the emotions of the characters, be in the moment, use their flair and motions and hand gestures. Act out the scene – multiple times – from every angle.

If you feel that emotion, you can write about that emotion. But remember, if they say something hurtful, you don’t want to tell the reader it hurt. You want to describe the hurt. The heaviness in their chest. The burning sensation behind their eyes as the tears began to form. The way his throat dried before trying to say something back which then came out cracked and wavering. If you aren’t truly holding back those tears yourself, you can’t really write that feeling.

Once you have put yourself on both sides of the conversation, and you are really acting out the scene (behind closed doors of course) – you will then know how they are feeling, whether they tighten their fists or glare back at you. If it feels forced when you act it out, it will feel fake when it’s being read. So don’t be shy about it. Don’t think you are insane – just do it.